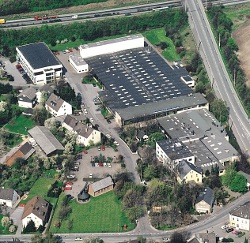 New warehouse management system including material flow system for an automated warehouse with two aisles, a storage feed area with buffer spaces and a shuttle

J.D. Neuhaus GmbH & Co. KG is world market leader for pneumatically and hydraulically operated hoists and crane systems with customers in more than 90 countries around the globe. As recognised expert in this field, at its plant in Witten, J.D. Neuhaus produces with 160 employees.

In the middle of 2014, J.D. Neuhaus decided to replace the warehouse management systems used in Witten by a more modern one, as it had started to show its age and was no longer maintainable. The decision was in favour of the WMS w3/max of w3logistics AG.

Since the warehouse management system is used to feed the production, right from the beginning the key premise was to reduce downtimes during the move to a new system as much as possible to avoid interferences with the production.

To make this possible, at first a high-bay warehouse simulator was created which allowed to test all material flow movements without having to access the actual conveyor technique directly. This simulator also proved to be a good tool for system demonstrations and for the training of the employees before taking the new system into operation.

Nevertheless, finally some tests with the real warehouse were necessary. For this, a handful of afternoons were chosen.

During these afternoons, short tests of the last critical processes in the system were made and the correct operation of the newly implemented solution was proven. Moreover, the interface to the on-site ERP system "Comarch ERP Enterprise" was tested successfully.

All in all, the taking into operations could be prepared so well, that the switch from the old to the new system could be handled during a single Thursday afternoon, including the data migration of the current stock levels.

Helmut Kerat, IT leader at Neuhaus in Witten: "The co-operation with w3logistics worked very well. The introduction of w3/max was completely trouble-free and done in next no time."

At Stahlwille pickers work with MDEs and data glasses with an individually tailored solution, whereas at BORCHERS Borken two different locations use the same standard despite of different infrastructures. Two solutions – and many satisfied customers of w3logistics ... more

Warehouse optimization: Get more our of your warehouse!

By means of its modular structure, w3/max makes it easy for you to optimize your warehousing processes step by step. This way you can adapt your system to fit changed requirements and your standard WMS becomes an individual solution exactly tailored to your needs. ... more

At Corpoplast, the solution of w3logistics operates a small-parts warehouse, and at the Erfurt plant of DMK Deutsches Milchkontor it controls a high bay warehouse with extensive materials handling equipment. All transports are controlled at PLC level and are optimized for manual handling ... more

You operate a cold or chilled cold store and have special requirements for your warehouse mangement system like Thüringer Kühlhäuser? You want to bill your warehouse services like Coldstore Hamm or das Frische- und Gefrierzentrum Rheine? Our industry solution is optimized to match your demands ... more