Software retrofit instead of reprogramming 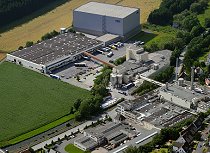 Since the year 2000, the WEPA paper mill has been controlling its warehouse for auxiliary supplies located in Arnsberg-Müschede with a Windows NT based computer. Reasons for an exchange of the hardware and software had accumulated during the course of time: Microsoft discontinued support for NT which therefore had already been replaced by WEPA in other areas, moreover the aged hardware posed a high risk of failure.

The order for the exchange was given to w3logistics AG. The specialists in software retrofitting from Dortmund had already impressed WEPA earlier with creative solutions for similar tasks. And creativity was surely demanded in this new project: The original supplier of the warehouse management software is no longer on the market, sources are unavailable, even standard modules were not obtainable from the manufacturers any more.

Once again, w3logistics could completely satisfy its customer: Instead of a time-consuming reprogramming, a concept for a migration was developed, registry entries were reconstructed and software components supplied through own contacts. Only two weeks of work were sufficient – the "old" software is now running on Windows XP in a new hardware environment.

Rainer Melles, manager of logistics at WEPA, is satisfied: "With the new solution we have considerably increased the stability of the warehouse and will also be able to exchange our hardware in the future – thanks to the installation instructions prepared by w3logistics, we will even be able to do this on our own."

The production and spare parts warehouse at the headquarters of the Dortmund machine manufacturer KHS has already been maintained by w3logistics since 2005 – surely the positive experiences were a reason why the integration ... more

Moving production to a new location and connecting to a new ERP software – but still using the existing packaging facilities: This was the challenge that GLORIA GmbH, a leading supplier of fire extinguishing systems, was facing. For moving the palletizing system ... more

Kluth stores for Kimberly-Clark with w3/max

At four locations in the Neuss area, the logistics service provider Kluth GmbH stores goods for his customers Kimberly-Clark and SCA – since the end of 2008 supported by the standard warehouse management system w3/max of Dortmund's w3logistics AG ... more