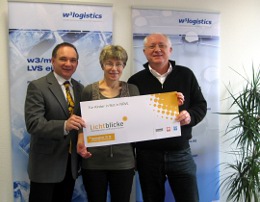 The IT company for logistics software from Dortmund wants to help fellow people who are in need through no fault of their own.

Aktion Lichtblicke has been active since 1998, and is a donation initiative for children and teenagers from North Rhine-Westphalia in need, as well as for their families.

The association was founded on 24 November 2005 in Oberhausen. Since then, the initiative has become a reputable institution, especially because of its high transparency and credibility. It is supported by Caritas and Diakonie, as well as the North Rhine-Westphalian local radio stations.

Today, most people already have an idea what Smart meters are. But it is just starting to get around that you can save a lot of money with them. w3logistics has developed an energy management software for Pötz & Sand GmbH & CO. KG from Monheim am Rhein. ... more

The decision was made already in February 2010: The logistical areas Ruhr and Rhine-Main win the excellence cluster competition of the Federal Ministry of Education and Research. The excellence cluster LogistikRuhr is a co-operation of 120 IT and logistics companies ... more