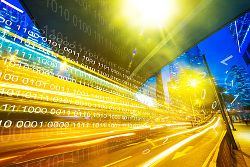 In the first contest round of the leading market competition "Mobilität­Logistik.NRW", 54 competition entries were handed in at the state of NRW. Ten entries especially delighted the advisory committee and were proposed for funding. One of these is "LEAN", a research project of a consortium which comprises not only the University of Duisburg-Essen and other partners but also the w3logistics AG.

The ten selected joint projects will together be funded with about 9.5 m. € EFRE subsidies and about 3.8 m. € co-financing.

In the research project LEAN, the development of a novel light weight stacker crane on the basis of cable driven robots will be evaluated. The North Rhine Westphalia based consortium will develop the highly innovative components and subsystems necessary for the implementation to be able to offer the most powerful stacker cranes based on the results of the research project in the future.

Compared to conventional stacker cranes, the project pursues a radically new approach: Of the conventional system, only the function of a storage and retrieval platform will remain. This will now be moved by a system of tensioned cables in front of the racks. These cables are coiled and decoiled under coordinated control of multiple winches und thus allow for a precise positioning of the storage and retrieval platform including the payload in front of the high racks.

The principal feasibility of the project idea has already been proven by the EffizienzCluster LogistikRuhr. The concrete aim of this project is it now to evaluate an actual long-term usage at a major third party logistics provider of a demonstrator based on the components developed during this project, to prove the practical feasibility in an industrial application.

Cable robots provide substantial speed and acceleration potential. To be able to make use of this, the underlying warehouse management software must take the dynamics of the system into account. In this project, w3logistics is responsible to develop optimal storage strategies based on its own standard warehouse management system w3/max.

From March 8 – 10, 2016, w3logistics AG will present their innovative solutions for the logistics of industry 4.0 at the LogiMAT in Stuttgart. Under the name w3/max S.P.O.T. we will introduce our enhanced software solution, which will let you operate your warehouse ... more

As part of an extensive outsourcing project THE GREEN LINE Nellen & Quack took over storage and distribution of spare parts for the machine factory Kemper in January 2015. The real hardness test followed only in autumn 2015: the start of corn harvest.  ... more

J.D. Neuhaus GmbH & Co. KG is world market leader for pneumatically and hydraulically operated hoists and crane systems with customers in more than 90 countries around the globe. As recognised expert in this field, at its plant in Witten, J.D. Neuhaus produces with 160 employees ... more